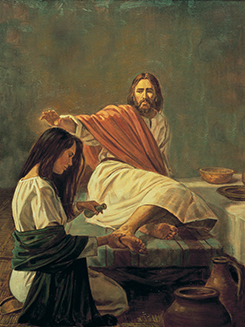 Mary Anoints Jesus’ Feet – Keeping What Is Given

Jesus, therefore, six days before the Passover, came to Bethany where Lazarus was, whom Jesus had raised from the dead. So, they made Him a supper there, and Martha was serving; but Lazarus was one of those reclining at the table with Him. Mary then took a pound of very costly perfume of pure nard and anointed the feet of Jesus and wiped His feet with her hair; and the house was filled with the fragrance of the perfume. But Judas Iscariot, one of His disciples, who was intending to betray Him, said, ‘Why was this perfume not sold for three hundred denarii and given to the poor people?’ Now he said this, not because he was concerned about the poor, but because he was a thief, and as he had the money box, he used to pilfer what was put into it. Therefore, Jesus said, ‘Let her alone, so that she may keep it for the day of My burial. For you always have the poor with you, but you do not always have Me. (John 12:1-8, NASB)

Why do you bother the woman? For she has done a good deed to Me. For you always have the poor with you; but you do not always have Me. For when she poured this perfume on My body, she did it to prepare Me for burial. Truly I say to you, wherever this gospel is preached in the whole world, what this woman has done will also be spoken of in memory of her. (Matthew 26:10-13)

These events took place the final days of Jesus’ life. Raising Lazarus from the dead incited a passion in the multitudes to make Jesus their king. This in turn drove the Jewish rulers to hasten their plans to arrest and execute Him. Jesus returned to Bethany where a supper was prepared for Him. The resurrection of Lazarus meant that many people were now following Jesus. In these first verses, we have the memorial scene of Mary anointing the feet of Jesus with a pound of pure nard and wiping them with her hair. As the aroma of her worship filled the house, John reports that Judas began to grumble about the waste of the nard. “Why was this perfume not sold for three hundred denarii and given to the poor people?” One denarius was one day’s wages; so if it was indeed worth three hundred denarii, this was costly perfume!

But John tells us that Judas did not care for the poor and was a thief. This shows us the wretched heart of Judas. Many feel pity for him, but the Bible tells us that even as Judas was following Jesus he was stealing from Him. We can see this in many places in the church today, especially among those who preach the prosperity message. They use the name of Christ to reward and enrich themselves.

See the contrast here between Mary who pours out on Jesus the most precious thing she owns, giving it all to Him in a memorial act of pure worship, and Judas the thief, who complains that this sacrifice was wasted – wasted on Jesus! Many believe this perfume had been given to Mary by her parents for her wedding night, to anoint the marital bed for her husband. What a precious gift she was giving to her Lord!

This passage illustrates for us that any act of pure worship, sacrifice, or charity will have those who oppose it, and the greater the sacrifice the more they will complain that it is wasted. Jesus rebuked Judas (and possibly the other disciples who may have agreed with him) and some believe this was the moment Judas determined to betray Christ (see Matthew 26:14). Keep in mind that Judas’ betrayal came shortly after he had witnessed one of the greatest miracles of all time – the raising of a dead man after he had been in the tomb for four days.

Finally, Mary’s act of abandoned worship became a memorial to her, as Jesus prophesied, “Truly I say to you, wherever this gospel is preached in the whole world, what this woman has done will also be spoken of in memory of her” (Matthew 26:13). Today we remember Mary and honor her deed. May it be a strong reminder and encouragement to us that whatever we give to the Lord in service, in sacrifice, in suffering, or in material possessions, will never be lost.

“Christ commanded that the record of this loving deed be preached throughout time until the judgment; and, in such a proclamation, she did in fact truly ‘keep’ the last drop of that precious perfume poured upon Jesus’ feet. Did not Joseph of Arimathea keep his tomb and the lad his basket, after giving them to Jesus? Did anyone ever give anything to Jesus without at the same time ‘keeping it’? What is given to the Lord is kept; all else is lost; and can it be any different with this nard? Mary poured all the nard on Jesus; but she ‘kept it all.’ Against the day of his burial? Yes, but also for all time until the judgment!” (Coffman’s Commentaries on the Bible, James Burton Coffman).

May you pour your life out for our Lord Jesus Christ, and in doing so may the fragrance of your sacrifice fill the hearts of all you touch for His glory.