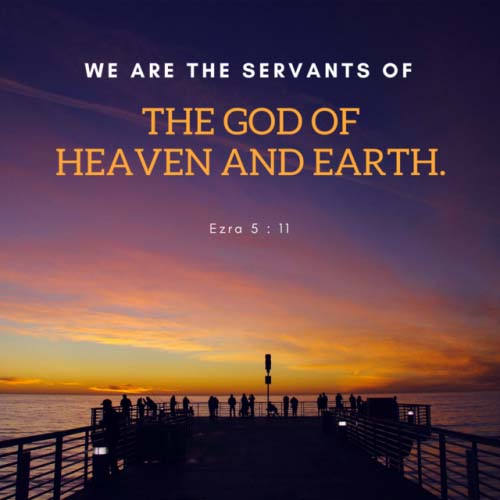 “We are the
servants of the God of heaven and earth and are rebuilding the temple that was
built many years ago, which a great king of Israel built and finished.” (Ezra
5:11)

The book of
Ezra tells the story of the rebuilding of Jerusalem and the temple after the
Babylonian captivity. God’s people had spent 70 years as exiles in a foreign
land because of their rejection of His purposes in them and their sin of
idolatry. The Jews who returned from the captivity to rebuild the temple and
the city of Jerusalem faced much opposition, poverty, danger, and hardship. Most
of them had been born in Babylon and had never seen the land of Israel. They
had to leave everything they had in Babylon to return to Jerusalem. Babylon was
their home, but it was not their identity. Their mission to Jerusalem was not
just to rebuild the city and temple, but to restore the Jewish national
redemptive identity – God’s prophetic purpose in His people. They were few in
number and had no resources for the task set before them. At times they became
discouraged by the relentless attacks of their enemies. They had to reject
proposed ungodly alliances and partnerships which were intended to dilute their
efforts in reclaiming their national redemptive identity. They had to put away
their foreign wives and children. The city and temple had been destroyed. There
was much “rubbish” in the streets which needed to be removed, and the walls and
gates of the city had to be rebuilt. They were mocked and attacked as they
worked and had to arm themselves with their swords as they labored. Yet they
persevered. In all of these challenges, they turned to the Lord, knowing they
could not complete their historic task without Him. Indeed, it seems as though
their struggles were designed and allowed by the Lord to purify their hearts,
ensuring the integrity of their efforts, and the integrity of their national
identity as the people of God.

The
Keystone Project is also assigned a great task which is not without challenges
and struggles. We have grown more quickly than our infrastructure can manage.
Every month we have to literally “pray in” enough money to make payroll and
food to feed our students. We do not have sufficient housing for our staffing
needs. Most of our staff are doing multiple tasks for which they are not being
paid. In addition, we deal with many spiritual attacks against our redemptive
community. In the midst of all this, we reject discouragement and despair, and
rejoice that we cannot do the task we have been assigned without the Lord. If
He does not show up, we will fail. We have not failed yet, but have, in fact,
succeeded beyond our capacity. That is not a testimony to us, but to the Lord
who never fails and is never, ever late. We cry out and He hears and answers
our cries. All we can do is laugh, even as we study our bleak financial
reports, because we know the numbers in them reveal the greatness of our God.

Where did the Jews get the strength and faith,
they needed to rebuild the city and temple? It came from the knowledge of who
God was and the knowledge of who they were because of Him. “We are the servants
of the God of heaven and earth.” They also knew their mission, “and [we] are
rebuilding the temple that was built many years ago, which a great king of
Israel built and finished.” At this moment in history, with the forces of evil
seeking to destroy all that is of God, we must find a supernatural strength and
faith to accomplish the task before us. Do we know who He is? Do we know who we
are? We are the church of the Lord Jesus Christ! Though we are in the world,
the world is not our home, and it is not our identity. We know who we are, and
we know what our mission is – to make disciples of all the nations. Though the
mission is with great struggle and hardship, and though our enemies are many
and strong, we will prevail. Jesus declared that the gates of hell cannot stand
against us!