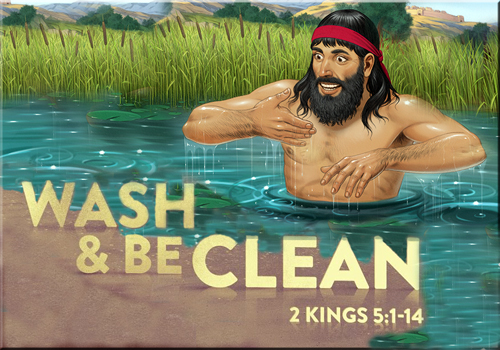 The Healing of Naaman

Before Jesus began His public ministry of teaching and doing many miracles to heal and deliver the people of Israel, He fasted and prayed for 40 days in the wilderness. During that time, the devil came to Jesus to tempt Him, but Jesus resisted the temptations of the devil, and returned from the wilderness in the power of the Holy Spirit.

He came to the city of Nazareth and read to the people from the book of Isaiah:

“The Spirit of the Lord is upon Me

Because He anointed Me to preach the gospel to the poor.

He has sent Me to proclaim release to the captives,

And recovery of sight to the blind,

To set free those who are oppressed,

To proclaim the favorable year of the Lord.”

Jesus then told the people, “Today this Scripture has been fulfilled in your hearing.” The people became very angry at Jesus because they understood that He was proclaiming Himself to be the Messiah, the Son of God, which they knew the Scripture was about. Jesus had grown up in Nazareth. They knew Him from the time He was a child, and they were unwilling to recognize that He was the only way of salvation for them.

Jesus told them, “There were many lepers in Israel in the time of Elisha the prophet, and none of them [meaning the Jewish lepers] was cleansed, but only Naaman the Syrian.” Who was Naaman? Why did Jesus use Naaman’s story to speak to those who were unwilling to believe in Him as the Messiah?

In the land of Aram, the king had a commander of his army named Naaman. He was highly respected by the king and all the people. He had great power, authority, and riches. However, he suffered from a terrible sickness called leprosy. In his house lived an Israelite girl, who had been captured and was a slave to Naaman’s wife. One day the girl spoke to Naaman’s wife and said, “I wish my master would go and speak to the prophet who lives in Samaria, because he could heal him.” Hearing the words, Naaman prepared for his trip to Samaria. He gathered many soldiers, horses, chariots, servants, silver, gold and clothing to take with him. He also had a letter from the king of Syria asking Elisha to heal Naaman.

When Naaman arrived at the prophet’s home, Elisha sent his messenger to speak to Naaman. Elisha’s servant told Naaman to go to the Jordan River and wash himself seven times and then he would be healed. Naaman was very upset because the prophet did not come out and speak to him personally and do some great healing act over him. He thought that the rivers near his home were cleaner and better than the Jordan River. In his anger, Naaman refused to do as Elisha had told him. But his servants convinced Naaman that it was best to obey the prophet. After all, he had not asked Naaman to do some great deed, but simply to wash himself in the Jordan River.

So Naaman changed his mind and decided to go to the Jordan River. When he arrived, he submerged himself under the water one, two, three, four, five, six times, but nothing happened. On the seventh time, Naaman was completely healed of his leprosy! His skin and body were healthy like a child’s. Naaman was very happy. He returned to Elisha’s home to thank him and offered him the gifts of gold, silver, and expensive garments he had brought with him. However, Elisha did not accept any of Naaman’s gifts but said that it was God who had healed him. Naaman returned to his home in Syria, happy and thankful, promising to serve only the one true God, the God of Israel.

This story took place about 850 years before the birth of Jesus. The story of Naaman teaches us three important things about salvation.

The first thing we learn is, that no matter who or what we are, we are all sinners.

Naaman was a great man. He was a powerful general, highly respected, and wealthy. He was even used by God to accomplish His will (2 Kings 5:1). The name “Naaman” means “nice guy!” But he was a leper. In the Bible leprosy is often a picture of sin. Lepers were shunned and disgraced. Apart from a miracle of God, there was no cure or hope for lepers. Despite all of his good qualities, riches, and works, Naaman was a leper. His leprosy could not be healed by anything he or anyone else could do. Only an act of God could heal Naaman.

The Bible clearly teaches us that we are all sinners – all spiritual lepers in need of cleansing: “For all have sinned and come short of the glory of God” (Ro. 3:23).

“There is none righteous, not even one” (Ro. 3:10). There is no human cure or remedy for our sin. Only an act of God can heal and deliver us.

The second thing we learn from Naaman’s story is that we cannot be saved by our own works, but only by God’s grace.

Naaman thought he could buy his healing from Elisha. He brought with him 10 talents of silver (which is about $265,720 in today’s money), six thousand shekels of gold (about $3 million), and ten changes of clothes. He came in his own strength and power, with his soldiers, horses, and chariots. Because he was such a mighty and powerful man, he expected Elisha to come out to him and do some great outward demonstration of spiritual power. He expected God to heal him with the things he himself loved – he loved power and expected Elisha to heal with power.

Elisha did not come out himself but sent his servant. God had sent Naaman a servant – the poor slave girl. Throughout history, God has spoken to us by His servants the prophets, and the people have rejected them. Then He sent His Son, and they killed Him. Are we willing listen to the voice of God’s messengers, even if those messengers do not look or act in the way we would want or expect?

Finally, the third thing we learn from Naaman’s story is that there is only one way to be saved.

Elisha instructed Naaman to wash himself 7 times in the Jordan River. Naaman became angry, insisting that his own rivers were better than the Jordan. When Naaman’s servants begged him, he went to the Jordan and was cleansed.

What an awesome God we serve, one Who is so kind and loving, and merciful, that way the to Him is made available to all people by a simple act – a choice – of faith! I pray you have chosen God’s simple way of salvation and have found in Him all that your heart desires.

This lesson is important because it teaches us that the way God saves us is the way God works in every area of our lives – by His grace through faith. Grace is God working in you. Rest in Him and let Him do His work in your life and you will experience all that He has prepared for you.