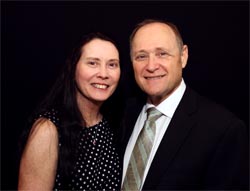 Those of you who have attended our training in Keystone, SD, have heard my wife, Marge, share a story from her school days. The teacher gave an assignment to her class in which they were to research and do a report on the United Nations. This was not a favorite topic for Marge, but she knew she had to complete the task. So, as she and her friend Judy walked home together, Marge would stop into the library with her and do the research and writing she needed to complete her UN report. Judy just sat there watching Marge do the assignment. Marge asked her, “Judy, aren’t you going to work on your report?” “No, I’ll get it done,” Judy replied. Finally, the due date for the assignment arrived. Marge had her written report and a chart she had drawn on the United Nations. She saw Judy’s report. It was beautiful, with colored pages and photographs and ribbons. But it was not a report on the United Nations. Judy did her report on her family’s summer vacation to Vermont. Marge asked her about it, and Judy told her that it would be ok. She felt certain that the beauty of her report would convince the teacher to accept it. In class, the teacher assigned some desk work to the students and called each one up individually to present their report on the United Nations for grading. Marge went up when her name was called and received only a “C” grade on it. She was disappointed but waited to see what would happen when Judy presented her beautiful report on her family’s vacation to Vermont. Would the teacher accept it? Would he be pleased with its beauty? Judy’s name was called, and she walked confidently up to the teacher’s desk, proudly presenting her report to him. “What’s this?” he asked. “It’s my report,” Judy said. “Judy, this is not what I assigned you to do,” he replied. “It’s very nice but I can’t accept this.” “Can’t you give me extra credit for it?” Judy asked. “No,” the teacher said. “You get extra credit only when you have done the assignment you were given. This is not what I told you to do. You did what you wanted to do, not what I wanted you to do.” As Marge listened to this exchange between Judy and the teacher, her “C’ grade suddenly appeared much better to her!

This story is a good illustration of what many churches and Christians are doing today. Before He ascended to His Father in heaven, Jesus gave us, His church, a specific assignment, called the “Great Commission” – “Go and make disciples of all the nations” (Matthew 28:19). He even gave us His Holy Spirit to empower us to do this assignment (Acts 1:8). Sadly, many of us have not done what we were assigned. Instead, like Judy, who was not interested in the United Nations and did not want to do that assignment, we have chosen to do our own work. We are doing what we want to do, not what Jesus told us to do.

The Great Commission is not just a call to make disciples, but to “make disciples of all the nations.” The nations are not “countries” but “people groups.” According to the Joshua Project (www.joshuaproject.net) there are 7,153 people groups in the world that remain unreached with the gospel of the kingdom. Those unreached people groups contain 3 billion people. Our assignment is to reach them. How are we doing? Are we even sending missionaries to them? According to the Southern Baptist Convention (www.sbc.net), there are around 400,000 missionaries in the world. Out of those missionaries, 72% (about 300,000) work among Christians. 25% (about 100,000) work among people who are “reached” (meaning they have access to the gospel). Only 3% (around 9000) work among unreached people groups. Even our missionary efforts are failing to complete the assignment given to us by Jesus!

We are doing many wonderful things in the church today. We have megachurches and buildings, inspiring worship services, many social care programs that help people, solid theology and teaching, all wrapped up in a beautiful package that we proudly present to Jesus. We expect Him to be well pleased with our efforts and the beauty or size of our work, even though we have not done the assignment He has given to us. He is not. There is no extra credit for those who have failed to do the assignment.

Don’t be Judy. Be Marge!